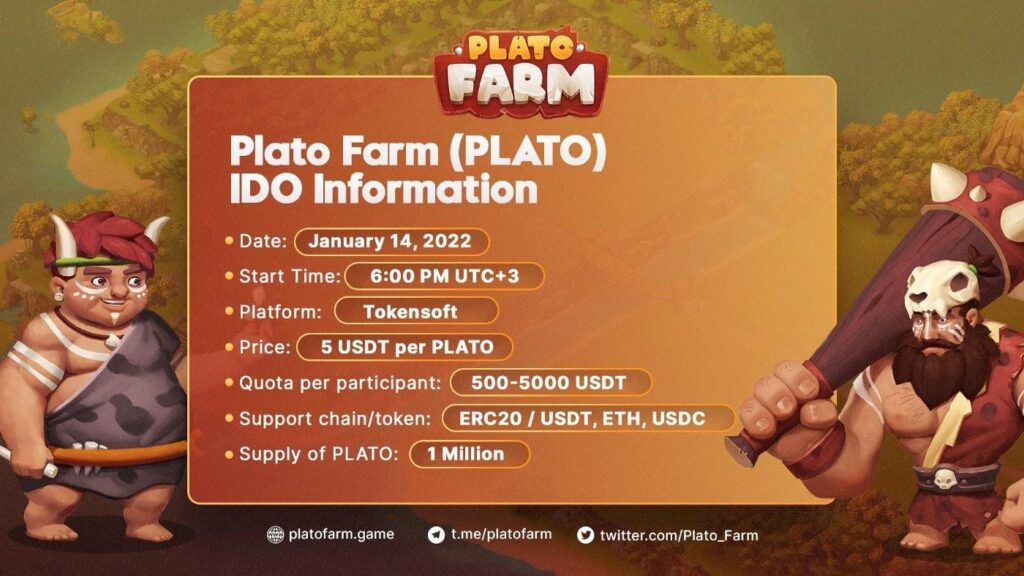 About the IDO participants:

Participants who successfully completed the IDO: 2,547

In the game, players can choose characters according to their specialties. They can elect a leadership committee through guilds or DAO governance, who will decide the best way or best people to spend the money. The Treasury shall be set up to make governance recommendations. Different characters will have different capital needs. Some players will focus on accumulating or harvesting certain types of products. Through the division of labor, Plato Farm is more in line with the working reality in the real world, thereby making the development more efficient, and generating more income.

The game is currently in the pre-launch of the GAMMA version, and players can only participate through ways like whitelisting. As of this writing, the total number of NFT transactions has been 1,067,981. Over 20,000 addresses hold the NFT assets of the game.

The tokenomics of MARK

MARK is the circulating token in Palto Farm. It serves as the medium of exchange in the game. General items and props in the game are anchored to MARK, and players must use MARK to purchase these items. When players use MARK  to buy items, Mark will be repurchased and burned by the system. The only way to get MARK is to complete missions and work in the game (through planting, breeding, processing, etc.). The ratio of MARK earned by completing tasks and working is 2:8. The output of MARK is based on the increase or decrease of the game’s GDP. When the game GDP increases, the MARK supply will increase according to the F(X) function, and when the game GDP decreases, the MARK supply will decrease according to the F(X) function. Whatever the case is, the daily output will not exceed 10 million.

Whether to increase the MARK supply is determined by the game GDP. Each additional issuance will be written into the blockchain, be publicized, and be able to check on the chain. Therefore, with the boom of the game ecology, the MARK will only affect the user experience reasonably and will bring more income sources to users.

Besides the gaming income, MARK can also help players to earn other income in Plato Farm, such as being staked for PLATO mining.

Plato Farm is an NFT game which supports HRC721, HRC1155 and ERC1155 protocols. Players are tasked with growing plants and raising livestock on a small farm to earn MARK and PLATO tokens which can then be used with various NFT items to transform their barren land into a bustling city. Players can also start their own guilds and earn money while playing.

Please follow the official accounts for the latest news: